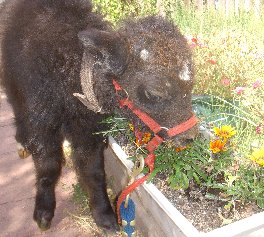 Solo is the first born calf of mama Princess Leia, who is about 4 years old. She was obviously a bit clueless to motherly duties, and after Solo would nurse, Leia would wander off with the herd of yak and leave Solo sleeping in the weeds, or by the fence. He would spend hours by himself, and Monte (who also has Buffalo, would worry about him a lot. If he'd find Solo alone and the herd way far away, Monte would pick Solo up, place him in his lap on the 4-wheeler, and take him to his wayward mama. Solo would furiously nurse, lie down for a nap, and be left behind once more.

At first we were going to bring Solo home to bottle feed at about one week of age, but then he seemed to be doing a bit better. But at about 4 weeks, he was just too thin and lost, and Tom brought him home in the back seat of the pickup. He had stopped by San Marcos Feed for a calf bottle and rubber nipple, and milk replacer.

Tom right away named him Solo, meaning alone. Many people who were Star Wars fans thought it was for Han Solo---hence the name Princess Leia for his mama!

Solo hated the hard rubber nipple and artificial milk replacer ( yak milk is known for its great richness and nutrition!), and it took exactly 8 days for him to start drinking well. (Now bought in 50# bags! We had to force feed him up to that time, fearing for his life! He was happy to munch the weeds in the yard, but never ate enough for a growing boy.

When Solo was about 2 months old, his mom and another cow/calf pair, Inky and his mama Pluma (''pen'' in Spanish) came to live with us. One week later we put Solo in the pen with them, and he tried to nurse, but Leia chased him away. He was still very addicted to his 3-times-daily bottle, and gave up the nursing idea after a couple of tries.

However, he started to be somewhat listless and developed a bacterial problem around his eyes; all the hair fell off and the lids were swollen. The vet came to inspect him, but there was nothing definitive. Carefully wiping with germ wipes and then applying shea butter helped a lot!! It's amazing what one can do while a baby yak is intently sucking on his bottle--or your thumb!

I decided that he MUST get some supplements, and I began fortifying his morning bottle with flavonoids, powdered infant vities, and a liquid vitie/mineral supplement. Within a week he was noticeably better!! Much more playful energy, softer coat, brighter eyes..... all around, MUCH better!

Solo loves chasing the doggies, as seen in this youtube. He LOVES licking human skin, and as seen here, loves giving Facials!!!

PS....... Solo finally had his last bottle; thanks to Dana Walden for putting together this terrific video memory of this sweet event!!!! we were sad that he missed out on all that rich yak milk, but what a way to get him to trust us!!! Enjoy his YouTube HERE

4 days after his last bottle, he was neutered -- now a little happy steer!!!!! I wanted to make sure he would heal fast and safely, and not get an infection, so he got 3 days of ''after the last bottle bottle'' just to get the vities (same as above) and Bentonite into his little system!!

Join in and write your own page! It's easy to do. How? Simply click here to return to Pet Care.