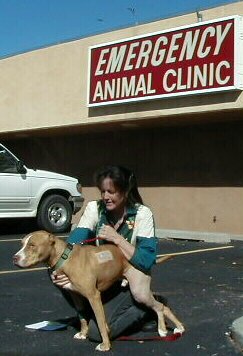 Chile after his first TPLO surgery

When Chile Pepper was 4 years old, he suddenly became very lame. He had torn the ACL in his left stifle (complex joint in the hind legs of quadruped mammals. It is the equivalent joint to the human knee). Sadly, I did not know that by giving joint supplements and rest, the ACL can heal itself! My neighbor's dog tore her ACL, and TPLO was recommended but was WAY too expensive for her; the only option was to let her dog heal, and she has!!!

Yes, Tibial Plateau Leveling Osteotomy (TPLO) is all the rage, and was recommended in 2000 for Chile's condition. I was desperate for him to continue to have a great life, playing tennis ball and horseback riding with us! Since he was a rescue dog, there were many people willing to chip in a bit of money for his surgery. He had a good recovery....but then the right stifle gave way, and Chile had his 2nd TPLO surgery just a few months later........

As the years go by, it was obvious that Chile's hind legs and haunches were beginning to atrophy, and some arthritis was setting in. Thankfully, we now had the Joint Supplements, and I began the routine. I also added Omega 3s, alfalfa tablets, and an all natural pain tablet. A GREAT START would be the new Advanced Joint Health Complex*!!

Thankfully, Chile is still getting around and having a fun life. Had we not had these terrific supplements, he would perhaps be crippled beyond saving.......

For the complete list of the supplements Chile and all our doggies get daily, Read Here!

Join in and write your own page! It's easy to do. How? Simply click here to return to Pet Care.