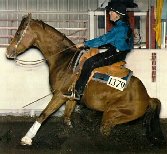 My 3/4 Arabian gelding, Baskips Amarhett, Rhett for short, came to me just before his 5th bday. He was always a bit sore and took short steps, hind left leg..... As he got in better shape he seemed to be pain free, and I began reining with him. After each of our lessons, which were very vigorous, I have him a muscle recovery drink and that seemed to help a lot too. He advanced so well that he won the very first ''Green as Grass'' award for the New Mexico Reining Association, and the Non-Pro Trophy Saddle in 1993.

But before the International Arabian Championship Show in Albuquerque NM in 1993, his lameness returned. I took him to 4 different vets for opinions and treatments, and nothing seemed to help much, if at all. At the Arabian show i met Dr.Ralph Johnson, DVM who also did equine acupuncture; he had worked on a friend's horse while she was working at the McQuay Reining Stables and had fabulous results with her horse. It worked so well on Rhett that I cried for 2 days; people thought my horse had died rather than having a ''miraculous'' recovery!!!

In 1995, Rhett went Top 10 in Half Arabian reining, and had the 4th highest score for the entire show!

Rhett continued to have yearly or bi-yearly acupuncture treatments, which really helped keep his hips and stifles pain-free. I don't remember what year it was that joint complex was added to our product line, but as soon as it was, I began giving it to Rhett.

By the late 1990s, he started developing wind puffs on his hind legs, and the various treatments which were recommended by my veterinarians were not helping that much. We did wraps and anti-inflammatories and rubs; he was still hurting. One day the herd raced up to the house at full speed, and after that he was noticeably lame..... I was heartbroken.

I tried many natural joint supplements, Chinese herbs, formulas from this and that organic place online and thru my holistic vet.... I got a little help, but NOTHING like the Joint Complex...

This time I decided to try the joint complex that we humans and canines had been taking, and within 2 months I was able to ride him again, though only about once a week. However, after 6 months, he was so much better that i was riding him 2-3 times a week. Several of the horses take this same product; some will eat the capsule whole, others like Rhett need the cap opened and the powder stirred into the grain.

Today his wind puffs are quite small and pain free, and I can ride him as much a I want, and go as long as we want. I am sooooooooooooo thankful for the wonderful ingredients in the joint complex and how well it works for Rhett, for the doggies, and for us!!!! Our ''collective'' joint pain is at a minimum!!

Rhett has had 2 serious colic episodes, but the colic ''cure'' has saved him both times. All of our equines get 3-4 herbs every morning with their grain.

I have absolutely no idea why this works, but the concentrated cleaning liquid seems to help the joints as well!! Our two oldest mares, Pilar and Halib, both sustained injuries 5-6 years back, stepping in holes; Pilar's knee and Halib's tendon never totally recovered and they were quite lame. Literally within 3 days of giving them the liquid, they were markedly better; not 100%, but enough better that they could be ridden a little bit, and I was not thinking their days were very numbered...... As I said before, this makes no logical sense, but it definitely made the difference, and does to this day.

Years ago, many farmers started using it for worming their farm animals and swore that it works better than any toxic chemical. We have been using it for a couple of years now and are worm free. The liquid is only available in 5 gallons, but the bucket has a happy home in the workshop where it's easily dispensed into a quart squirt bottle. Once again, it makes no sense as to why it works, and it is NOT endorsed by the company, but by golly, it does work!!!

Looking forward to hearing what results others have gotten with their horses and all their beloved pets!!