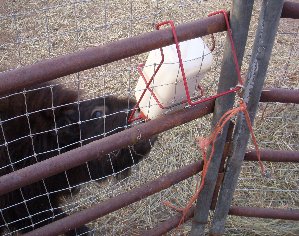 When we first got Solo he was about 4 weeks old. We nick named him Mr. Buttinski because he did not like us, and he'd crash into our legs at every opportunity! Talk about funny looking bruises!

Basically, he was abandoned by his mom; Solo was her first calf and she would wander off, leaving him sleeping in the weeds. He was very thin and needed force-feeding, he did not like the formula or the rubber nipple on the bottle. We started with the small goat-nipple on a plastic water bottle, and had to dribble it into his mouth, hoping he'd get more down his throat than on us and him!

The first few days were really a struggle, and we got frustrated and disheartened, wondering if he would ever get the idea that we were actually helping him.

Thankfully he was eating a few weeds, some grass, the yellow and gold daisies, and a little Calf Manna---but barely enough to keep him nourished.

After exactly 8 days, he suddenly fell in love with his bottle, totally collapsed the plastic water bottle, and we switched him to the Big Calf Bottle!! He has been ravenous ever since! Holding that bottle, he'll follow us anywhere!!

We used to feed him ''by hand'' where we would sit on a chair and hold the bottle, but pretty soon Solo would butt the bottle SO hard that he was once again causing bruising...... so we got a bottle holder, put it on the fence, and tied it down using an orange baling twine. Just think what mama yak have to endure......

We have been putting some extra vities into his bottle to help him feel better, and it sure has helped a lot! You can read his details HERE.

He was almost 4 months old before he started loving his treats---alfalfa pellets and other horse treats from the feed store. His favorite is a reddish, soft treat All-American Horse Candy; for about 2-3 weeks he'd sort-of chew treats and then spit them out, or occasionally actually swallow them. Now he wants more and more!

We made a movie and put it on youtube to show how excited he gets when he drinks his bottle!